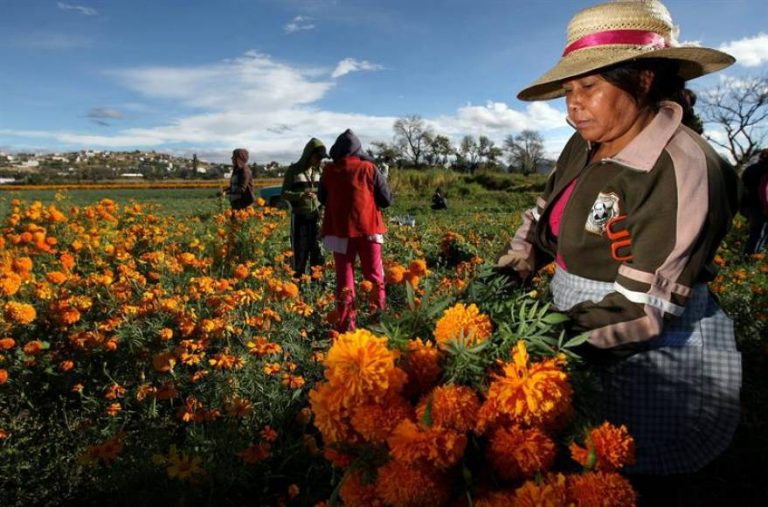 Sinking its roots in the pre-Hispanic past, the tradition of using cempasúchil flowers, known as the Mexican Marigold, to decorate altars on the Day of the Dead festivities survives thanks to Mexican farmers who showcase their brilliant products these days.

The Mesoamerican cultures attached great importance to the cult of the dead, with different ceremonies to honor the ancestors. Since then, the Mexican Marigold was used to decorate the offerings and altars, a tradition that continues today.

After the arrival of the Spaniards, these rituals were assimilated to the Day of All Saints, which is celebrated on November 1 and 2. But the beautiful and fragrant flowers, native and iconic of this country, continue to be used symbolically to guide the souls of the deceased in their visit to this world.

In the Caltongo neighborhood of the municipality of Xochimilco, in the south of MexicoCity, farmers prepare in advance to show on the eve of the Day of the Dead not only these, but also other ornamental flowers such as roses and poinsettias in their stalls.

In the area, the orange variety of the Marigold is cultivated (there are also yellow ones), which are transported in trajineras, as are the small rafts that travel along the famous channels of Xochimilco, a cradle of ancestral techniques of agricultural production.

From there the flowers depart to be distributed in markets and stalls of Mexico City and other states of the country for the festivities.

Jorge Valencia Gómez, a producer from Caltongo, says: “From my grandparents. They sowed vegetables, and from there they already started to plant ornamental plants. As a child I helped my grandparents, then my parents, and here I am “.

“I had school, but it fascinates me; I love the earth and I love nature,” he adds.

He tells that his children sometimes come to help him, but he recognizes that today’s young people are no longer so dedicated to this business. “Well, they already have their work, they have school. But, yes, they are suddenly here, helping me,” he says with resignation.

The farmer explains that in order to have ready the flowers in this season they start to germinate the plants “in their charolita” from the first week of July.

“From there we waited four weeks, the little plant grows and the first week of August we put it in its pot. And from there it took ten weeks for it to be almost finished” and it could be put on sale at the end of October, he says.

According to Valencia, in the Caltongo area, there are around 1.6 million plants that are produced in the approximately eight hectares of the neighborhood.

People are very interested in acquiring these plant wonders. “And that’s what motivates us as producers to continue working. It’s good that people are interested in our tradition of the Marigold for Day of the Dead, and (that) they continue this tradition. That’s nice,” he says.

Jorge Valencia emphasizes that throughout the Republic the Marigold is the flower of Day of the Dead, because it represents that endearing festivity in which “our dead have the belief that they come to visit us”.

“So, the Marigold is never missing from this tradition,” he says.