If visitors to Guadalajara can be enticed to leave the city for a day, you can be sure they will head either to Tequila or to Teuchitlán or to both.

On their way, they will speed right past the town of El Arenal, never suspecting that when it comes to the origins of tequila the drink, this little pueblo has far more to offer than Tequila the town, and as for the ruins of the great civilization that built the Guachimontones (circular pyramids) two millennia ago, little Arenal may have been at its very hub.

Why then do tourists go all the way to Tequila and Teuchitlán when they can see “the real thing” at Arenal, located a mere 30 kilometers from Guadalajara?

This question I put to myself after spending a day exploring the agave-covered hills of Santa Quiteria with Dario Chavira, director of El Arenal’s Calavera Museum.

My adventure began with an outstanding photo of a Guachimontón or circular pyramid posted by Chavira on his Facebook page. Completely dotted with blue-green agaves, this mound had a look I had never seen at the archaeological ruins of Teuchitlán or anywhere else: the perfect blending of the Tequila Route with the vestiges of the Volador or Flying Birdman culture which dominated this area around 2,000 years ago.

Given that UNESCO recognized both traditions as a single World Heritage Site in 2006, I figured this photo would work well as its official image. Curiously, however, the mound in this picture lies neither in Tequila nor in Teuchitlán, but in an area northeast of Arenal called Santa Quiteria, which was called “one of the really monumental and spectacular archaeological sites of the state of Jalisco” by none other than the famed discoverer of the Guachimontones, Phil Weigand (1937 to 2011).

One fine Saturday in July, Dario Chavira took some friends and me on a tour of Santa Quiteria. Just past El Arenal, we turned off the Guadalajara-Nogales highway onto a dirt road heading north.

For kilometer after kilometer we drove through nothing but picturesque fields of blue agaves, along the way passing Hacienda Santa Quiteria, whose fascinating story I will tell in a future article. Then we began to work our way upwards into the hills, the agaves now replaced by enormous rocks, after which we found ourselves winding through a gorgeous pine and oak forest, only to pop out at the top of the highest hill at an altitude of 1,609 meters, exactly a mile above sea level.

“Dario, this brecha has been beautifully graded and in perfect condition for 10 kilometers. I’ve never seen such a glamorous dirt road anywhere else in Jalisco! Just where does it go and who is paying to maintain it?”

“Bueno, this road was reconditioned thanks to Miguel Ángel Landeros, the owner of Tequila Triunfo and the president of the Consejo Mexicano de Comercio Exterior Occidente and in a minute you’ll see what he’s doing up here.”

Our magnificent road finally ended at a newly constructed cabin from which we were treated to an absolutely spectacular view of the Mesa Alta archaeological zone, lying within the Paisaje Agavero (Agave Landscape) with a most dramatic backdrop of the Tequila Volcano dominating the horizon.

From this vantage point, Dario pointed out the agave-covered Guachimontón or Volador Mound whose photo had caught my eye, and a ball court next to it.

As I stood there on that mile-high peak enjoying a perfect view of those ancient monuments, I could fully appreciate the imagination and showmanship of their builders: the Flying Birdman Nation, worshipers of Ehecatl, the Night Wind god.

Their mounds always had a tall pole at the top and the concept was probably born as a simple way of keeping track of time. Four ropes made of agave fiber stretched from the top of the pole to the ground, marking the four cardinal directions. Month after lunar month, the ropes were rotated, the windings on the pole indicating the passing of time. While the pole served as a calendar, some also see it as the world’s first computer.

At the end of a year, feathered Voladores would climb to the platform at the top of the pole, detach the ropes and leap gracefully into space, soaring through the air, while a fifth companion representing what the ancients called The Fifth Direction would dance on the platform, playing a beautiful melody.

After the birdmen landed, the cheering crowd, which filled the ring around the mound, would join hands to form a huge circle of joyful dancers, perhaps several circles moving in opposite directions like the workings of some bizarre mechanical game.

This show, of course, could only be fully appreciated from an elevated point of view. And there we were on the peak of Santa Quiteria Mountain taking in the view from the very place the elite of the Birdman tradition probably watched the show ages ago. It was an exhilarating feeling!

“We’re looking at the Mesa Alta section of Santa Quiteria,” Dario told us. “It’s one of two areas Phil Weigand sketched. These two sets of ruins convinced him that Santa Quiteria was second only to Teuchitlán in size and importance. But since his death many other pyramids and constructions have been found all around Santa Quiteria and Arenal. Believe it or not, 3,000 hectares of ruins have been documented here by a team of archaeologists who walked over every meter of what you see below us.”

Weigand, I am sure, would have been delighted and I suspect might even have declared Santa Quiteria — rather than Teuchitlán — the true capital of the Volador People.

Lucky indeed to enjoy such a view will be the people who will eventually live in the cabins that will be built up along this ridge by Miguel Ángel Landeros and his partner Hector Barreto, owner of another brand of tequila which is called Tributo a Mi Padre in honor of his father, Hector Sr., the founder of the US Hispanic Chamber of Commerce.

We drove back down to the mound we had been viewing and explored the area on foot, eventually arriving at the south end of the adjacent ball court.

“This juego de pelota is only 75 meters long,” said Dario as we approached a cliff edge, “but 500 meters straight below us you can see the really big ball court that so impressed Weigand.”

While circular patios around a Volador mound were the unique hallmark of the so-called Teuchitlán Tradition, the ball court was characteristic of all the peoples of Mesoamerica. 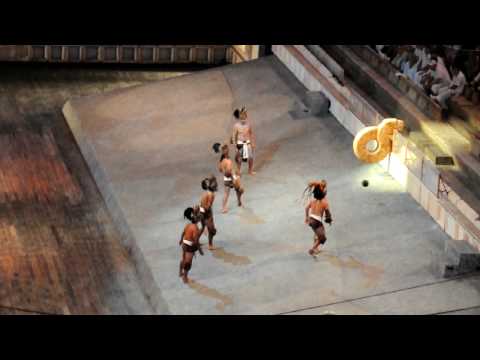 The video gives an idea of how difficult it must have been to play the ancient ball game.

The ball was made of rubber and might have weighed as much as four kilograms. Once the ball was thrown into the court, players could not touch it with their hands or feet. Instead, they hit it with their hips, elbows or knees trying to get the ball all the way to the end of the I-shaped court where they would make a goal by immobilizing the ball in a corner.

The ball games were played both for religious and secular purposes and were frequently used for settling disputes,  a game often lasting all day long, from sunrise to sunset.

To me the most amazing thing about this ball game as played in the Volador Tradition was the scoring system. The team members were expected to play impeccably. A foul of any sort was considered so gauche that the offending team would be castigated by having points taken away from them.

“Games ending in negative scores were not uncommon,” said Phil Weigand after studying modern-day tribes who still use the same approach to scoring.

That ball court we were gazing down upon is 135 meters long, the biggest in Mexico and much longer than the one in Chichén Itzá. Its monumental size plus the dramatic view of the Tequila Volcano from every point in this site strenuously argue — in my opinion — that Santa Quiteria was the real heart of the 2,000-year-old “Teuchitlán Tradition” documented by Adela Breton and Phil Weigand.

Sadly, what’s left of Mexico’s biggest pre-Hispanic ball court no longer looks anything like it did in the 1990s when Weigand sketched it. This site is supposed to be protected, but it has been plowed over so many times that only an archaeologist could recognize what it once was.

Will the last vestiges of the very heart of Jalisco’s World Heritage Site fall victim to what can only be called patrimonicide?

While local authorities seem to be doing nothing, Miguel Ángel Landeros and Hector Barreto are now collaborating to create a foundation aimed at preserving the extraordinary archaeological ruins of Santa Quiteria, a fitting tribute indeed to the extraordinary people who inhabited western Mexico 2,000 years ago.

The writer has lived near Guadalajara, Jalisco, for more than 30 years and is the author of A Guide to West Mexico’s Guachimontones and Surrounding Area and co-author of Outdoors in Western Mexico. More of his writing can be found on his website.