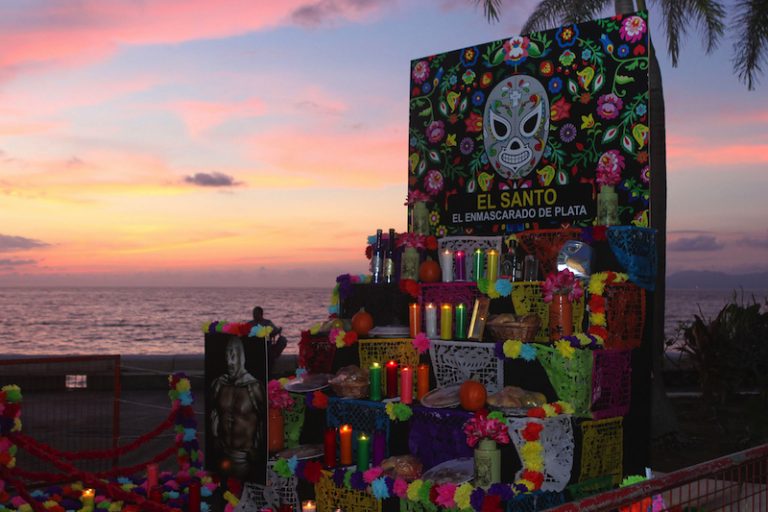 Being one of the most important traditions of Mexico, the Tourism Directorate and the Vallartense Institute of Culture (IVC), announces the Day of the Dead Festival, which will take place from October 31 to November 11.

At a press conference to publicize the program of activities of this festival, María Guadalupe Guerrero Carvajal, president of the Tourism and Economic Development Commission, said that this celebration is one of the most emblematic of Mexican culture and declared by UNESCO as Intangible Cultural Heritage of Humanity.

Puerto Vallarta is ready to celebrate with music, culture, dance, gastronomy, color and an excellent atmosphere with the different events that will take place as part of this festival.

The program includes musical concerts, cinematographic exhibition, contest of calaveritas and catrinas, not only in Los Arcos del Malecón but in alternate venues such as in the Lázaro Cárdenas park, where the Mexican festival “La Muerte Viviente” will be held, and in the Hidalgo park, a monumental altar will be mounted, among other places in the city.

Over 40 altars will be exhibited along the Malecon and in front of the Municipal Presidency; the traditional maleconeada “La Muerte Charra” will be held on October 31, while on November 2 the parade “La Muerte está Viva”, starting in the pantheon of the colony December 5 and ending at the Lázaro Cárdenas park, where there will be Mariachi, ballet, among other activities.

The tourism sector joins these actions, with the adoption of 60 palm trees on the boardwalk that will be dressed and characterize in its entirety as a catrin or catrina.

Ramón González Lomelí, director of Municipal Tourism, said that this event will be coordinated in order to make it an attraction in Puerto Vallarta, as a manifestation of Mexicanness, being an important aspect to strengthen the customs and traditions of our culture.

He explained that so far there is a record of 80 altars of the dead that will be installed by the participants, including hotels, restaurants, schools, municipal offices, among others, in addition to having had an excellent opportunity to participate in the traditional parade.

Marina de los Santos Álvarez, head of the IVC, indicated that this year the program includes activities in the delegations of Ixtapa and Las Palmas, as well as in the Mojoneras, where there will be music, catrine and catrine catwalk, altars and more.

There will be the performance “Mictlán” by the pre-Hispanic dance group Tlálocan, whose show will be presented at the institute’s facilities, in Ixtapa and the Lázaro Cárdenas Park.

On Tuesday, 6 muralists began to paint 6 murals in the pantheon of the colony December 5, which will be finished in three days, in addition to that along the boardwalk there will be the exhibition of thematic rugs by the University Center of the Coast, as well as the traditional pan de muerto, among other activities that will be carried out.

THE POWER OF STEM CELLS & EXOSOMES
Scientists have recently developed advanced protocols harnessing the power of exosomes to create a new class of therapeutics to improve the effectiveness of stem cell therapy. In particular, they have developed new protocols for neurological diseases such as Alzheimer´s, Parkinson´s, Autism and Multiple Sclerosis. Read More